Earlier this year as part of Pride London, a small group from the LGBT Residents Forum visited the Bishopsgate Institute opposite Liverpool Street Station - home of the LGBT Archives.

Resident Stephen Johnson was kind enough to share his experience: 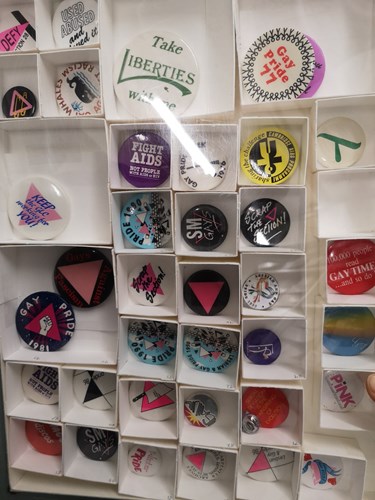 “The mere mention of the word 'archives' conjures up images of vast amounts of records that have lying on dusty shelves for an eternity. Nothing could be further from the truth.

“There were banners and placards once firmly held on past Pride marches held decades ago. There was a collection of politically charged statements on clothing and badges. These would have accompanied the long and hard fought campaign for LGBT rights and equality from the legalisation of homosexuality in 1967, through to the resistance to Clause 28 introduced in 1988 and later efforts to secure the right to be gay in the armed forces!

“To be honest, the building contains an impressive, concise and detailed record of our political, social and cultural heritage and includes banners from notable marches and demonstrations, badges, campaign t-shirts, pamphlets, a vast array of magazines and papers including memorable LGBT publications such as Gay Times, Capital Gay, Pink Paper.

“I was thrilled to discover a large collection of New Statesman magazines that included three articles I wrote during a summer internship I was lucky to be provided with in 1988.

“But the incredible collection of LGBT material also included many personal records donated to the archives. We were shown some very poignant diaries written by gay men, including a Vicar who lived in a different era to today. Thoughts of repressed sexualities, fear of exposure and even possible blackmail, police arrest and incarceration during the pre-1967 prohibition era entered my mind as I realised that the rights and freedoms I currently enjoy were once non-existent.

“I felt very privileged to be shown some very personal photos of lesbian and transgender people who were proud of their identity. Some photos dated back to the 1950's and 60's - an era that witnessed huge changes in social attitudes and sexual freedom, but where a lot of prejudice and hostility for just being "different" still existed.

“As London celebrates LGBT pride, it's wonderful how people come together regardless of sexual identity. But what this amazingly brilliant and deeply moving archive demonstrates is that we must never ever take our freedoms and rights for granted and that there is still a lot more work to do!”