The life of one of our inspirational former residents was celebrated last weekend with a blue plaque being unveiled in her honour.

Cecile Nobrega lived at Lee Samuel House, a Notting Hill Genesis sheltered scheme in Brixton. She died in 2013 but the event on Saturday marked what would have been her 100th birthday.

She was an accomplished composer, poet, sculptor and educator. In the 1990s she launched The Bronze Woman Project, a charity aiming to create a permanent public monument to womanhood, taking its name from a poem she had written. 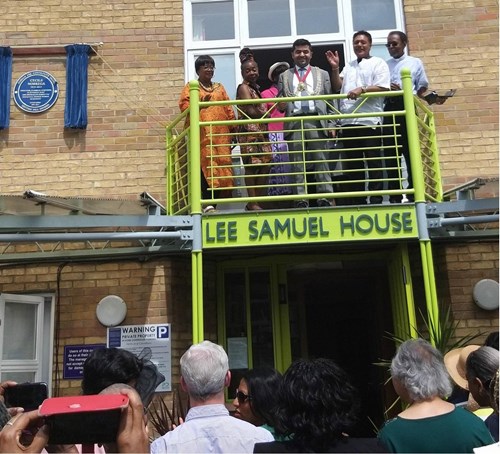 After years of fundraising, the 10ft statue of a mother and child was erected in Stockwell Gardens. It was the first statue of a black woman to be on permanent display in England, and was unveiled in time to mark the 200th anniversary of the abolition of the slave trade, as well as the 60th anniversary of the arrival of Caribbean immigrants to Britain on the Windrush.

Raised in Georgetown, Guyana, Cecile wrote music and poetry from a young age. She married Romeo Nobrega in 1942 before going on to start two schools, a nursery and a vocational school for teenage girls. She won several awards for her music and also wrote plays, one of which – Stabroek Fantasy – had a record run in Guyana and then at the Jamaican Pantomime as Carib Gold.

She moved to the UK in 1969 where she worked as a teacher, was active in the National Union of Teachers and campaigned against the placement of misunderstood children, often from ethnic minorities, into schools for those with special educational needs.

After her campaign for the Bronze Woman statue a success, she slowed down, but remained active with Lambeth Pensioners and practised tai chi.

Bruce Nobrega, Cecile’s son, added: “This was a very special occasion for our family and we are very proud that my mother is being remembered in this way. Thank you to everyone who helped make this possible.”