Two distinctive artworks on Notting Hill Housing properties in Lambeth have been listed by Historic England.

The “sculptural reliefs” are outside the stairwells of Wareham House and Horton House, in Bolney Meadow, Vauxhall.

Both were created by artist Peter Laszlo Peri in 1951-52 from coloured concrete. Wareham House has an image called “Boys Playing Football”, while Horton House has “Mother and Children Playing”. 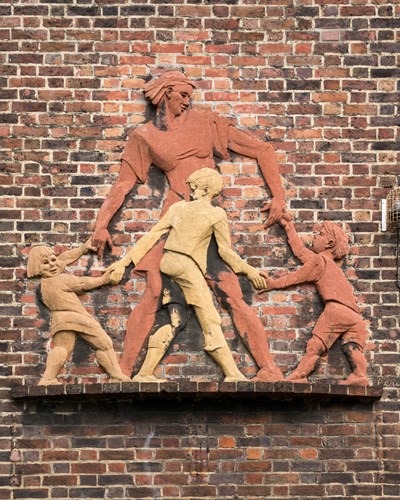 They have both been Grade II listed, described as “a rare example of LCC post-war public art in the context of social housing.”

Peri was born in 1899, to a working class Jewish family in Hungary, and worked as a lawyer’s clerk before attending evening classes in art. He later settled in Berlin, working as a sculptor, until moving to England during the rise of the Nazis.

He pioneered the use of concrete for expressive sculptures and came to specialise in architectural reliefs.

Mark Vaughan, Group Director of Housing, said: “Both artworks are great additions to our properties in Bolney Meadow and we are pleased they have been recognised by Historic England.

“We hope this listing raises their profile and they will continue to be enjoyed by our residents and those living nearby.”