A picture found at a Notting Hill Genesis (NHG) supported scheme and featured on the “Antiques Roadshow” earlier this year has now sold for £500 which will go towards a welfare fund for residents.
The drawing depicting an army in a village setting was spotted by staff during a spring clean of Hope House, a scheme for formerly homeless people in Norfolk. The picture had hung in a ground floor corridor for as long as staff could remember, and no-one knew where it came from. 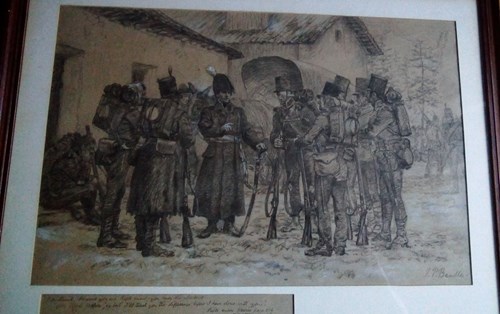 The staff decided to get the picture valued. They applied to the “Antiques Roadshow” who invited them to come to a filming of the show in Cromer which was broadcast in February 2019. Two staff members, including lead project worker, Laura Clarke spoke to expert Paul Atterbury. 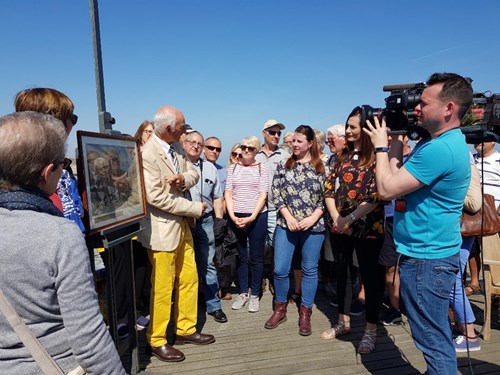 Laura said: “Paul told us that the picture was by a famous war artist called James Princip Beadle whose paintings are in museums such as the Imperial War Museum in London, and that it was worth between £500 and £1,000. Given how long it had been hanging in Hope House with people walking past it every day, we were stunned that it was worth that much!”
Shortly afterwards, Laura and her colleagues were contacted by the Royal Green Jackets (Rifles) Museum in Winchester. The museum had extensive knowledge about the sketch and one of the people depicted in it (General Robert Craufurd).
Brigadier Vere Hayes, Chairman of the Museum Trustees said: “The sketch by Beadle shows General ‘Black Bob’ Craufurd, so called because of his explosive temper, berating a group of 95th Riflemen during the Peninsular War.  Although a formidable disciplinarian who frequently ordered flogging for relatively minor offences, he was a respected and trusted leader who commanded The Light Division and was mortally wounded in the assault on Cuidad Rodrigo.”
Laura and her colleague brought the sketch to Winchester where they were given a personal guided tour of the museum (which included a small display on Craufurd). The museum made an offer of £500 to purchase the picture, with a further £250 to have it restored since its time on the wall of Hope House had resulted in some damage to the paper. The sale was finally agreed in October:
Laura continued, “It took a while for the sale to go through. Not only did we have to arrange a convenient date to travel and stay in Winchester, but the museum also wanted us to provide proof of ownership, something that proved tricky given that nobody quite knew how the picture came to be in Hope House. In the end, an agreement was drawn up by a solicitor to enable it to be sold.”
Brigadier Hayes continued: “Once restored and reframed the sketch will be displayed in the ‘Road to Waterloo’ exhibition that covers the Peninsular War and the part played in it by Riflemen; it will be a valuable addition.”
http://rgjmuseum.co.uk/