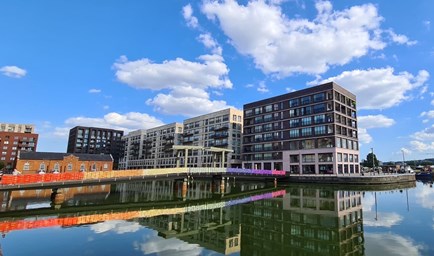 An art project that brought a community together to celebrate the heroes of the pandemic has earned an international award.

You may remember how as we settled somewhat uncertainly into lockdown during the first wave of the epidemic, images of rainbows began to appear in windows and chalked on pavements or hanging from trees. The artists behind these images were usually children and had created them to cheer up passers-by who may have been doing a bit of rainbow-spotting during their daily exercise. It was also a way of giving messages of support to key workers such as NHS staff.

This rainbow movement inspired an East London resident Andrew Morris to create a message of hope for his community to enjoy. He designed a rainbow on a large scale and with a little help from his neighbours installed it on a footbridge over the basin near their homes in the Royal Albert Wharf in Newham. The project recently won the public vote for the Installation Design of the Year in the Dezeen Awards 2020.

Andrew, who runs the architecture-design-art Studio Curiosity, installed a prototype of the rainbow on the railings of his balcony to plan how it would translate to a larger scale. He sourced 5,000 metres of biodegradable acetate in various colours and with the help of NHG and RAW Labs, an art centre managed by the Bow Arts Trust, he and 50 other residents of Royal Albert Wharf got busy cutting the acetate into ribbons and wrapping them on the railings in a mosaic-style pattern.

The project was completed over two weekends in a carefully co-ordinated schedule to ensure that the installers complied with social distancing. Some vulnerable residents who were shielding were able to participate from home by cutting the ribbons to size for the installing team to collect. Residents whose balconies overlook the basin were able to watch the rainbow on the footbridge grow.

Charlie Claydon, of Well Bean Company, runs a mini chocolate factory based at RAW Labs and had front-row seats. As the bridge became 'rainbowfied', he felt it was bringing ‘hope and solidarity’ to this recently created community of the development in the Royal Docks which was brought closer together during what for many had been a difficult and isolating time.

Like real rainbows, the RAW rainbow was only designed to be temporary. It was taken down in the summer but the acetate pieces are with RAW Labs now and will live on by being re-used in future art projects. Memories of the rainbow however prompted residents and visitors to give it their vote in the Public Installation competition from the influential architecture and design magazine Dezeen. The rainbow won with 62,000 votes - beating competition from New York, China and Saudi Arabia! Congratulations to Andrew and his RAW rainbow team.